This week I did do some more work on my QR HO wagon.  The side bracing was added to the second wagons and bogies added.

I also got my spy camera out (I’ve had it for 3 weeks tomorrow) and got around to charging it and gave it a very quick test run.  The instructions that came with it were undecipherable and luckily I then found a YouTube video on its operation and an English version of the camera’s manual online.  The camera was OK.  It can even be used as a webcam.  Not bad for something worth $13 + change.  I am thinking that I might need to buy another one so I can just keep one down the shed and one with my laptop for when I want a second view on something when I do an online meeting.

On Friday I visited what was my local hobby shop.  It was Simon’s last day of trading from the store.  I went in and there was practically nothing left.  He had sold it all off.  No styrene, no paint.  That was what I went down to buy.  But what I left with was a styrene stand.  I really have no room in the shed to house it, but I know someone with a larger styrene collection than me who has a shed just as big and could use it.  If he didn’t want it, I was going to pull the stand apart and put all my styrene on one of the sides and attach it to a wall in the shed.  I think I’d go close to filling up one side in the number of packets I have.  However, Raymond and Lefty accepted the stand, and they now have it in their shed.  They can put magazines in the end slots used for various types of styrene sheets.  The other side they could use for bogies, detail items, and other nick-knacks that they have to allow them to put things on display.

Raymond's styrene stand.  One side completely full.  I did send him an email and told him that the packets start at the top and are fed behind the next row, so you can see all the packet numbers.  Photo by "& Son".

Magazines stored in the end of the display.  Photo by "& Son".

More styrene on the other side.  Photo by "& Son".

Saturday afternoon I participated in a Zoom meeting of 15 guys from the local NMRA division, and one from across the ditch.  That was a great meeting and the first of many if the local superintendent gets his way.  That will be great.  Later that night I attended the NMRA 12 hour session which was started off by two Australian presenters.  I particularly wanted to see the first session on signalling.  It was very disappointing that the video footage was very stuttery and lots of vision was missed when it caught up.

Today I have spent some more time on my QR HO wagons.  The second wagon was completed but didn’t get sent over to the paint shop as planned.  KD coupling have been added, as well as end wagon detail.  On this version I also added the door detail which I did not put on the first wagon.  I may eventually go back and add that, but I’m in no rush.  I then started cutting out the next three QR HO wagons.  Well 3 turned out into 4 more.  Two will have the doors removed and two will have the doors still on.  With the components cut out, I thought I might then assemble the top of those wagons.  So that has now been completed.  I think all of the wagons need a small amount of weight added to the centre sill to help them stay on the track better. 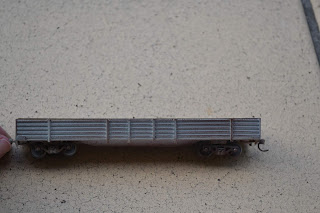 My first QR HO wagon.  The light does not do it justice. 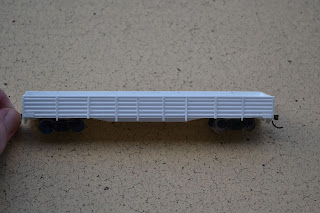 The second one completed and ready for the paint shop next Sunday. 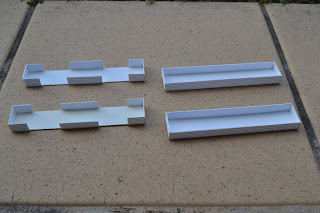 The next 4 QR HO wagons still requiring external detail and under floor detail.  That is next Saturday's job.

Quite a quick and easy process that has worked out costing not much money at all for 6 new wagons in the roster. 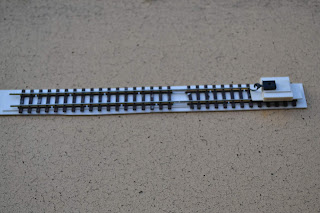 Last week I also put together a small test track for 12mm wagons.
Posted by Cassino at 7:03 PM