On Tuesday this week 15 Tuesday Nighters came over for a look at the layout and its progress and was followed by a cuppa and bit of supper and plenty of discussion.  It was a very full turn up.  Discussion did turn to some of the bargains in the Aldi catalogue which went of sale yesterday.  I purchased the cheap compressor which came with two sprays guns.  I also purchased the Moto-Tool with the clamping base and a flexible drive shaft.  I also picked up the Mini bench grinder also with its own flexible drive shaft.  This was then given to the boss, as I said she can put it away until my birthday in just under four weeks.
This was followed by my mate David coming over on Friday night with a couple of locos to get programmed up with a long address and he also dropped off two more locos (actually British HST’s) to have a decoder installed into.  So I am bit by bit showing David how to do all this programming so he can be self sufficient.
This morning I made up some styrene formwork so I could pour some concrete bases for the bridge. 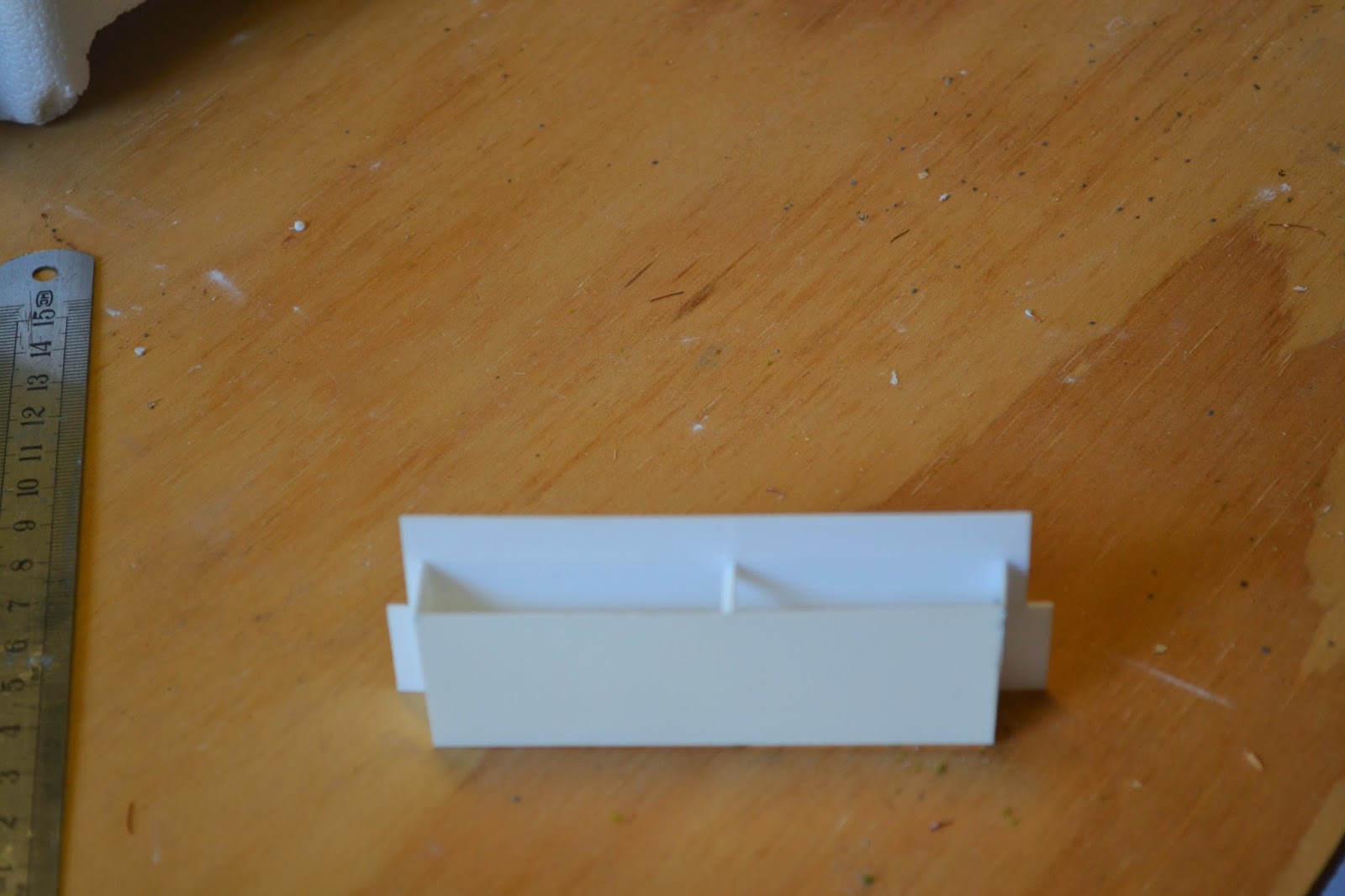 The styrene formwork for my bridge pier. 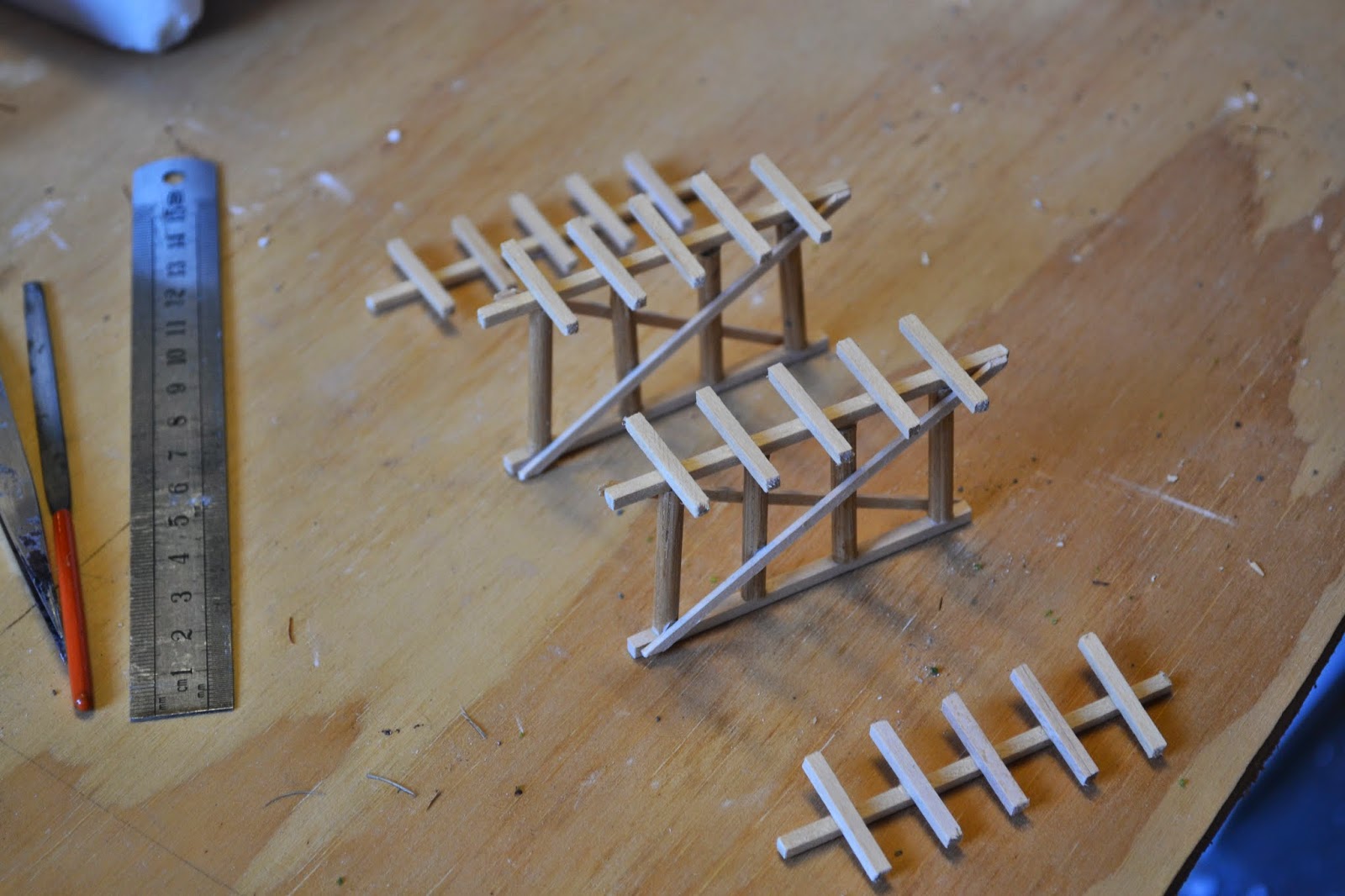 The wooden bridge piers for my NSW timber overbridge as per the Greg Edwards Data Sheet P5.
I poured the first one and cut it out of the styrene, and then I glued the styrene formwork back together.  As that was drying, I decided to pour a few plaster rockwork castings for around where the bridge was going to be positioned.  I then poured the second concrete base for the second bridge pier.  When it dried, I again cut that out of the styrene formwork. 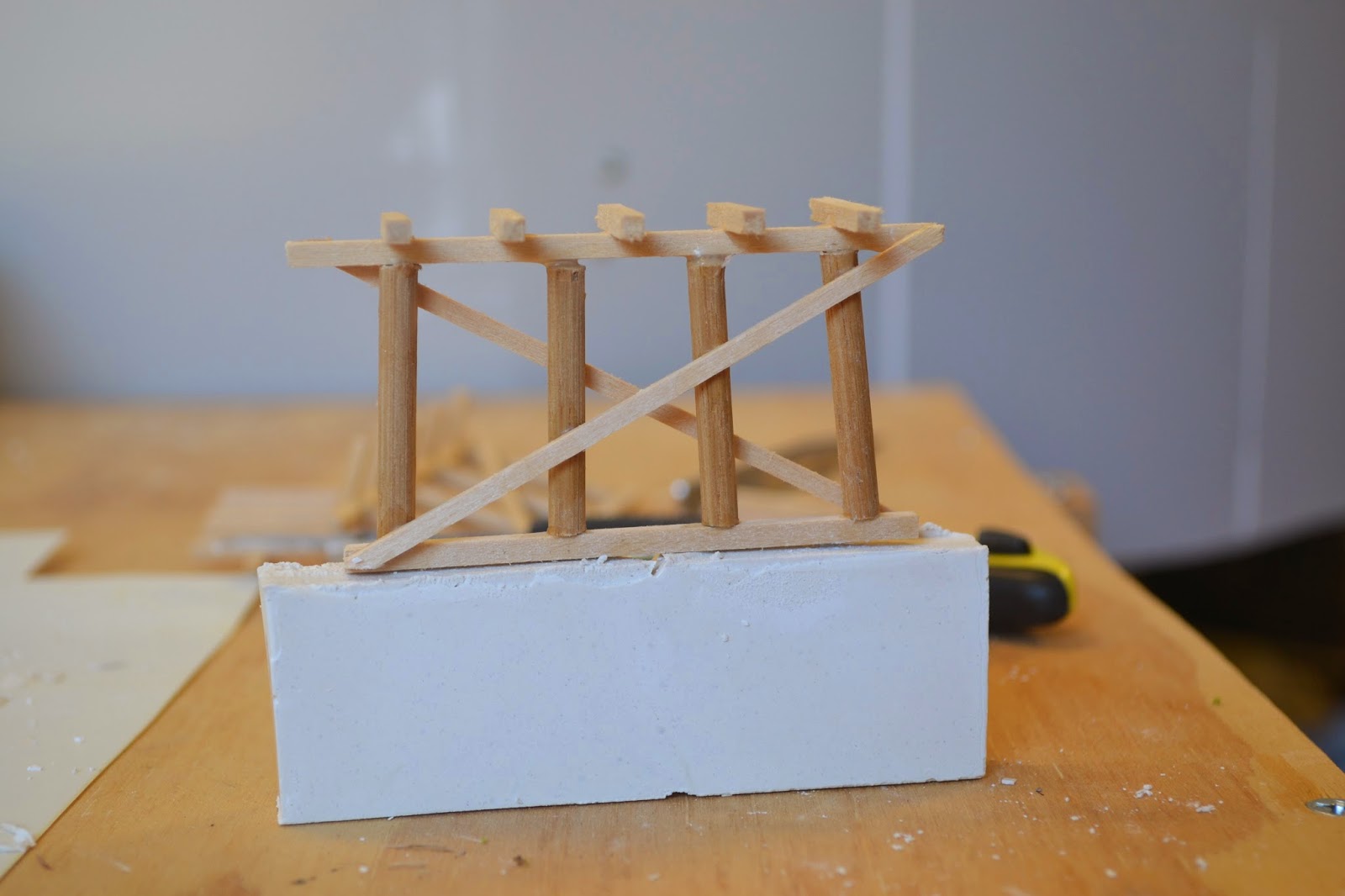 This is the first cast of the plaster pier with the timber bent on top of it.


I had to go out just after lunch for a few hours with the family and upon return went back down to the shed for another hour.  Just to make sure that the bridge was going to fit into the area that I plan to install it in, I tried assembling the bridge on the now basically dry concrete pier bases. 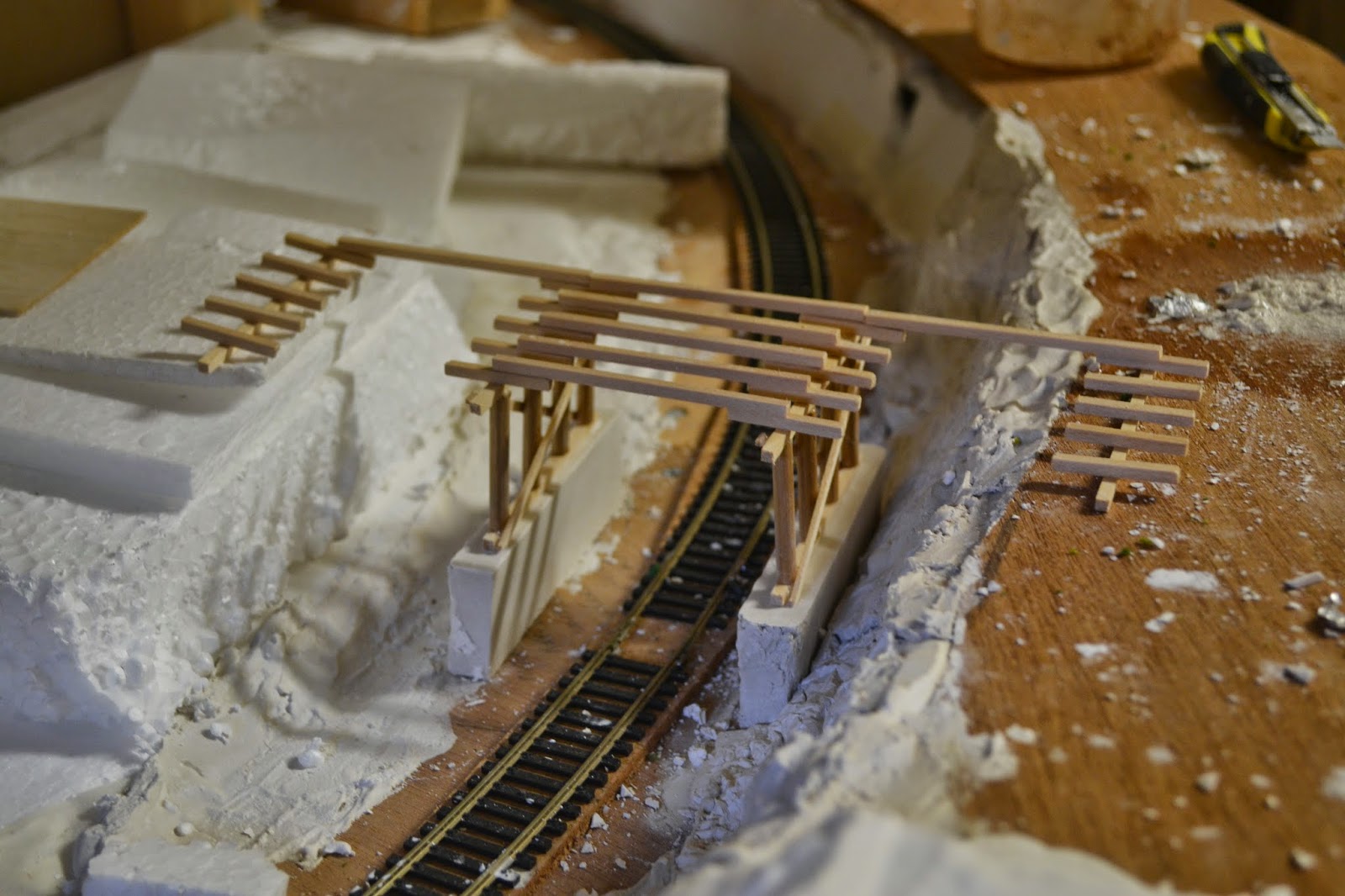 Here is the bridge components sitting on the layout for a trial fit.  I still need to glue all the Styrofoam on the left of the picture and build up the ground level to the right.
To respond to Rowan’s comment from last week, I have included some photos of the various trees that I have on the layout, including the few I purchased off Bob at the Buy and Seel the week before. 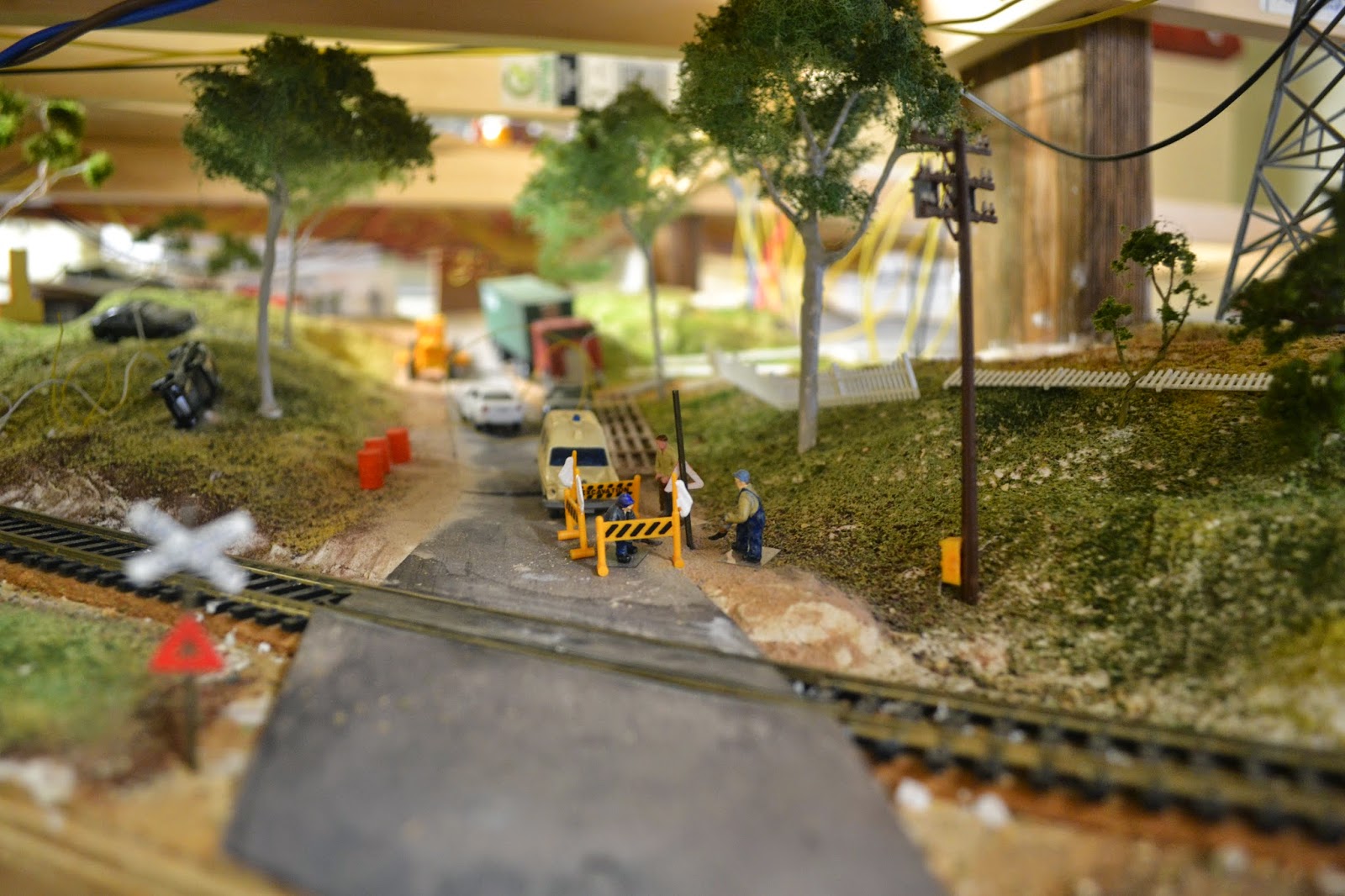 Looking up Fairy Lane on the layout.  A bit of work being undertaken near the level crossing.  The fencing for the B&B on the right has to be installed.  This lane will eventually become a tree lined vista.  These are the trees that I picked up at the Buy and Sell. 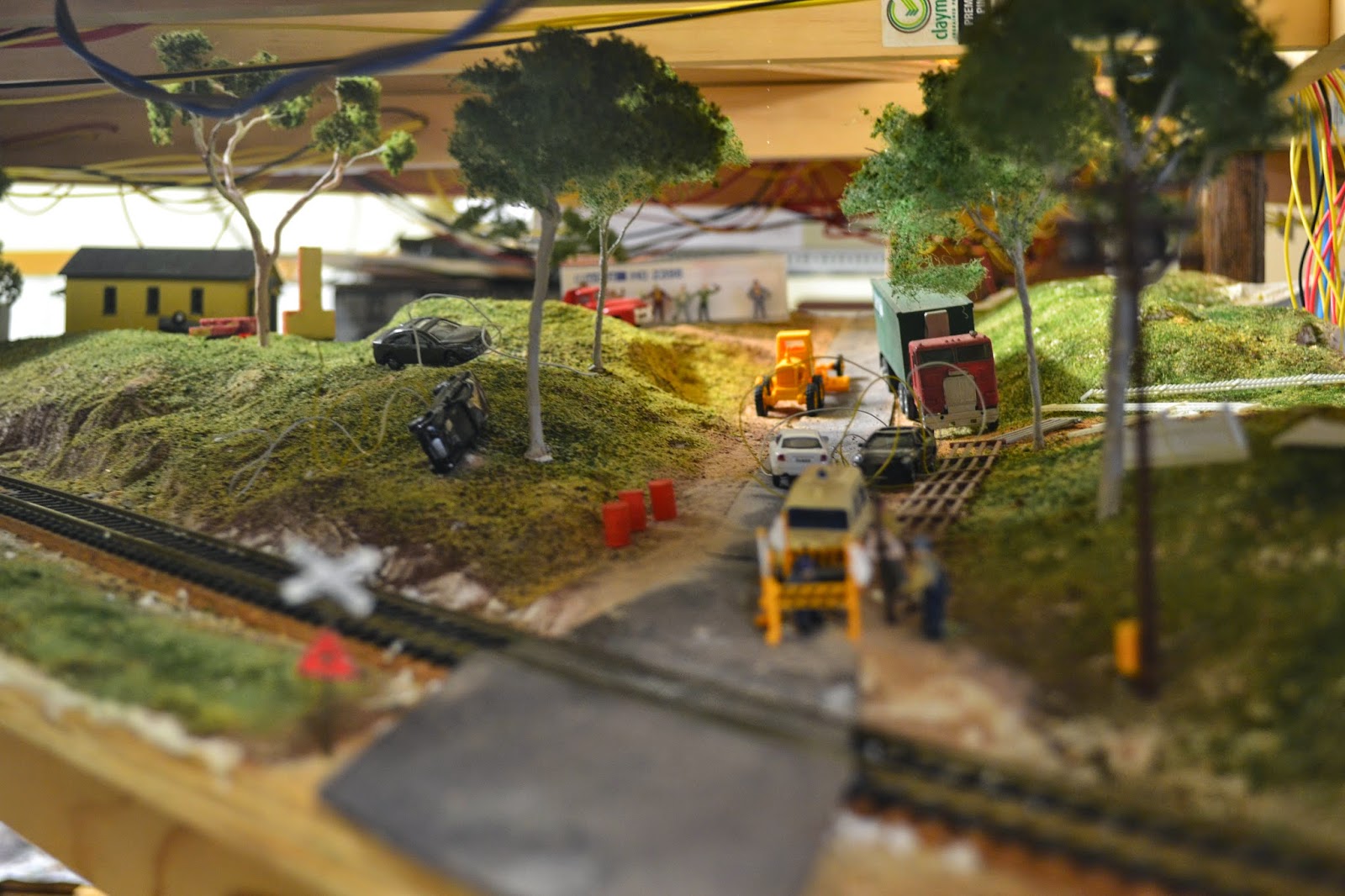 It looks like the sun has come out at the top of the lane around the grader while the rest of the area is under cloud cover.  In the distance can be seen the local community hall. 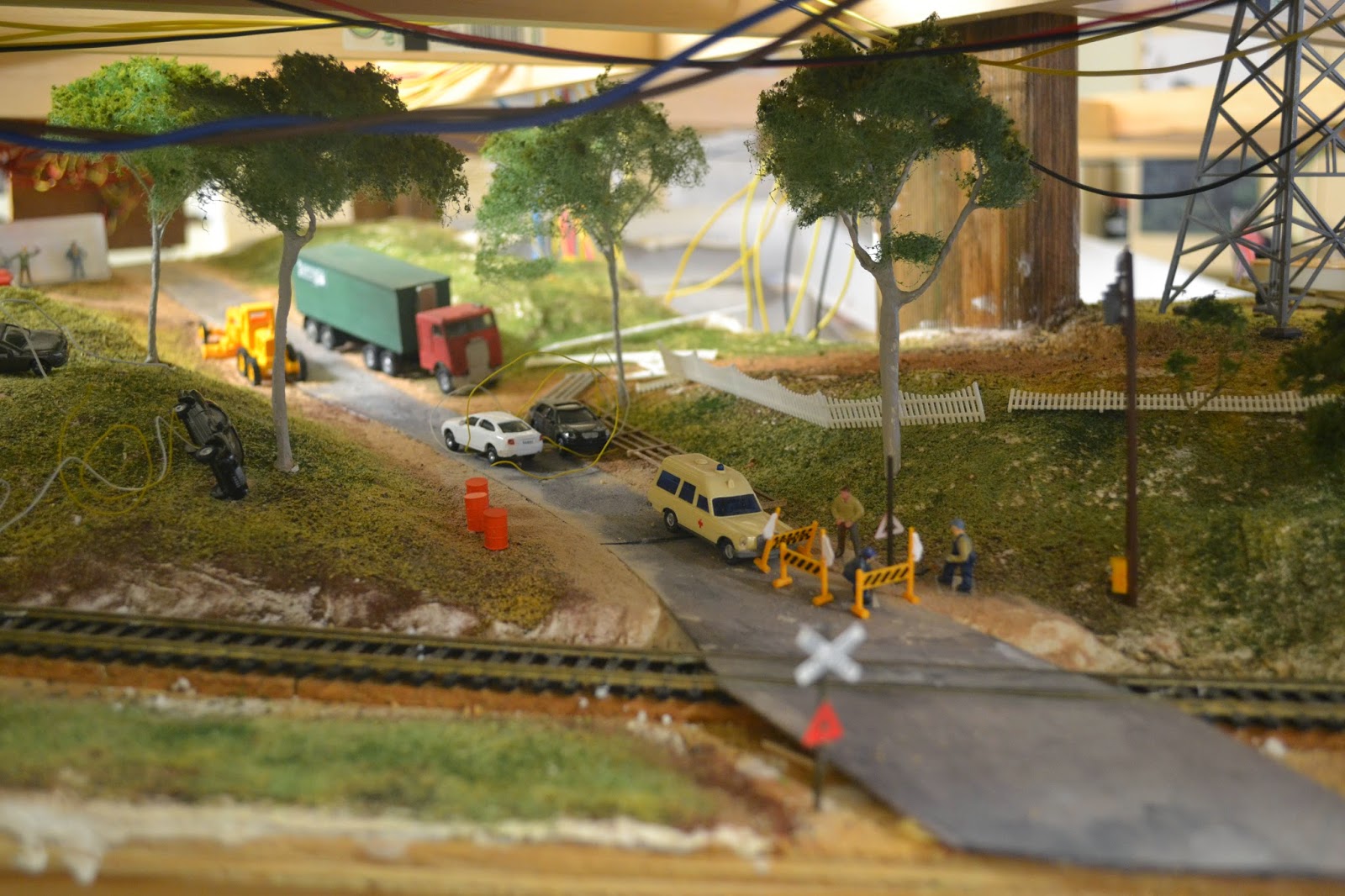 The same area for another angle.  Plenty of further work to be done in this scene. 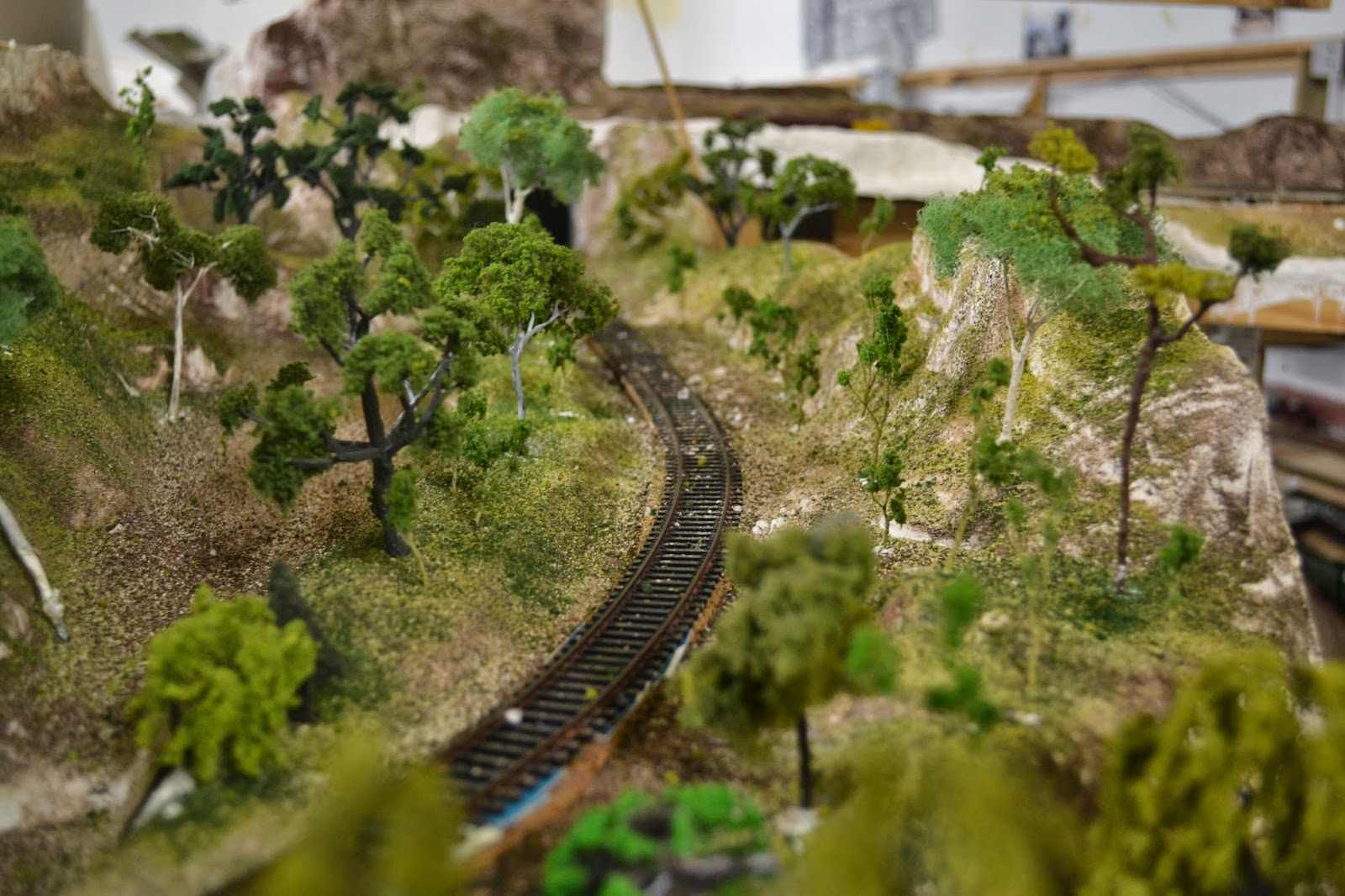 Looking south towards Border Tunnel.  A variety of trees are in this photo.  Two of the latest ones I purchased off Bob are visible here. 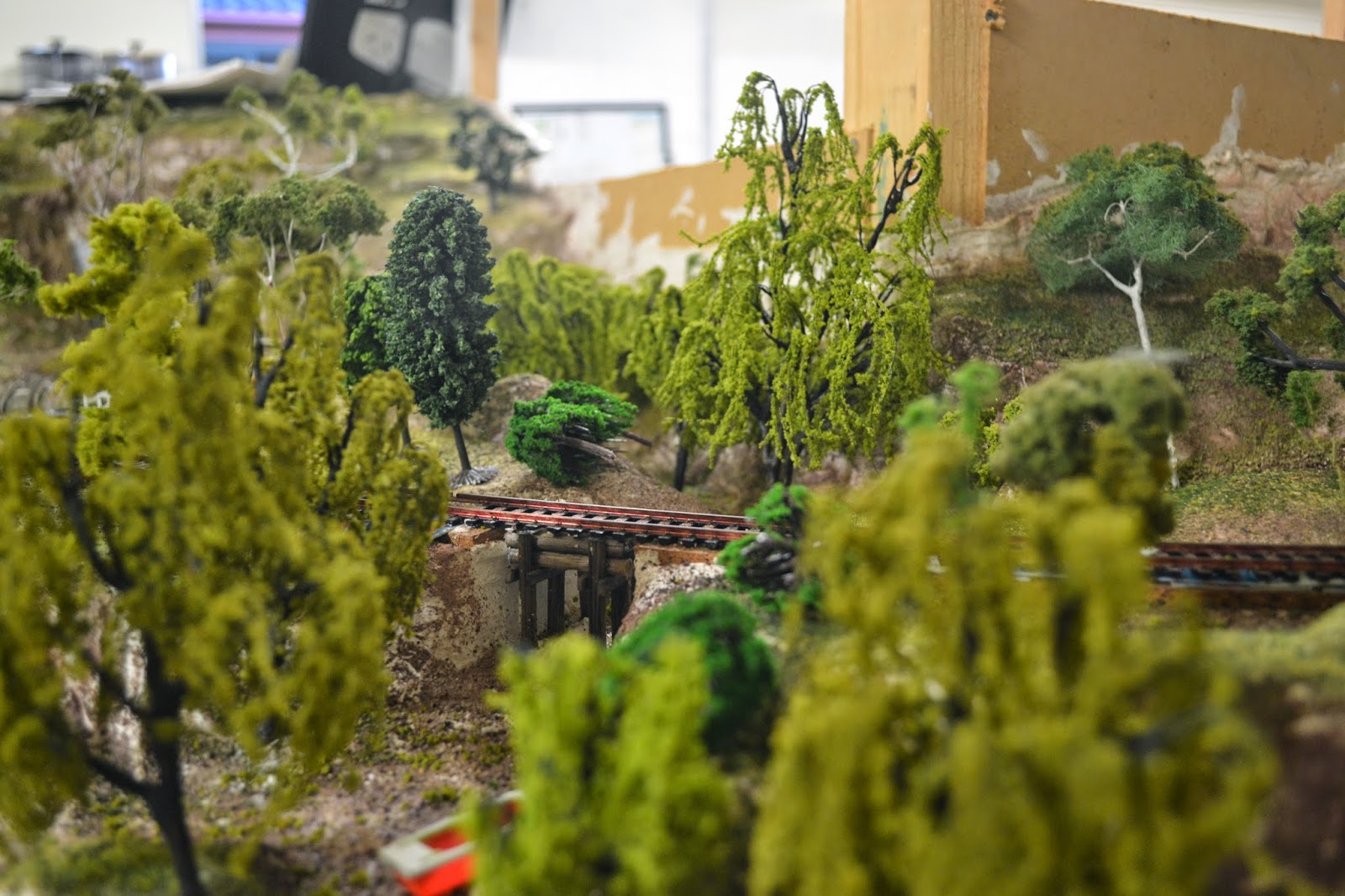 Looking up Running Creek.  A few more weeping willows are needed for here. 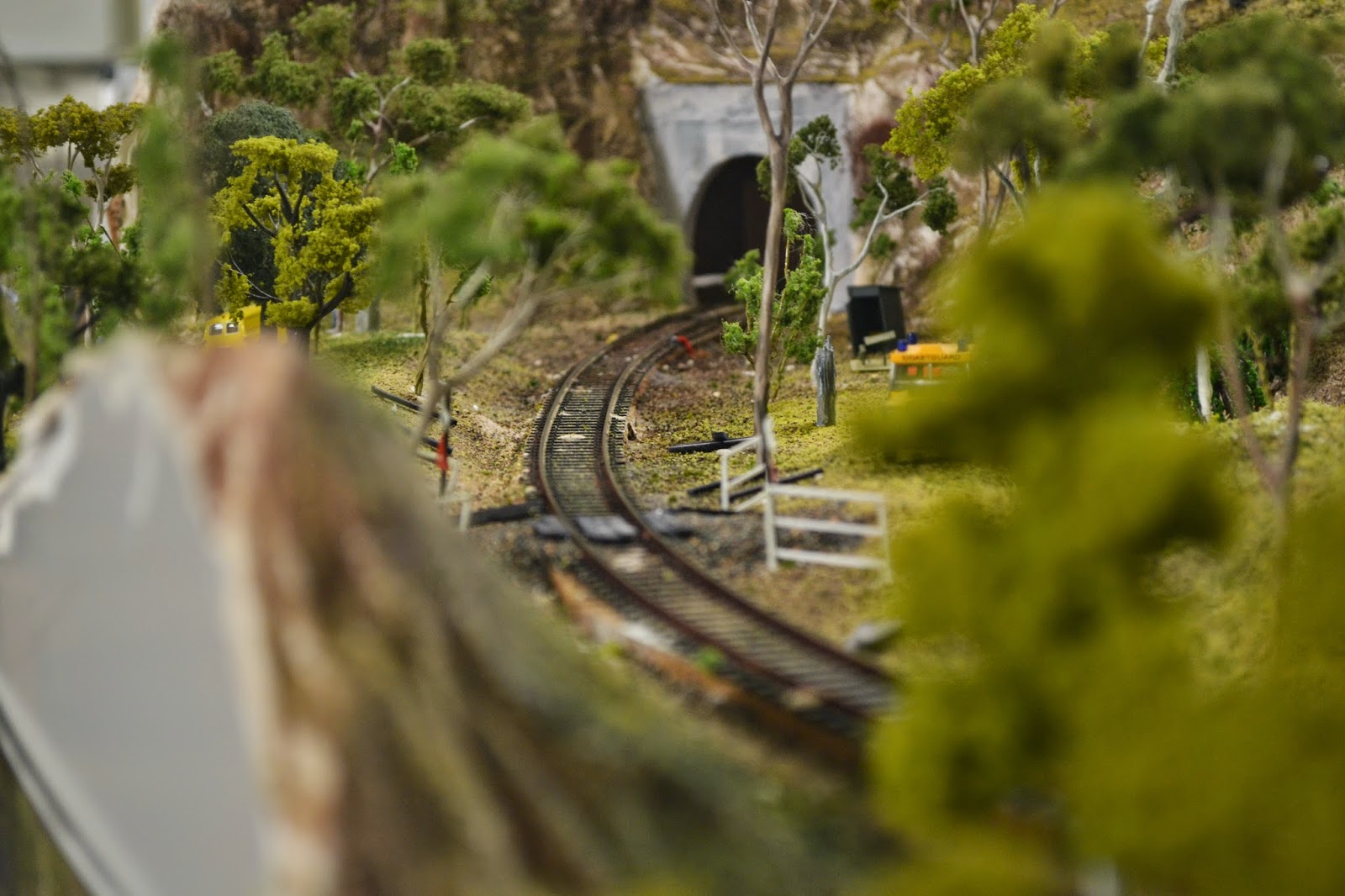 Peering through the trees we see the local crossing to a small camping area where the naturalists visit in Summer. 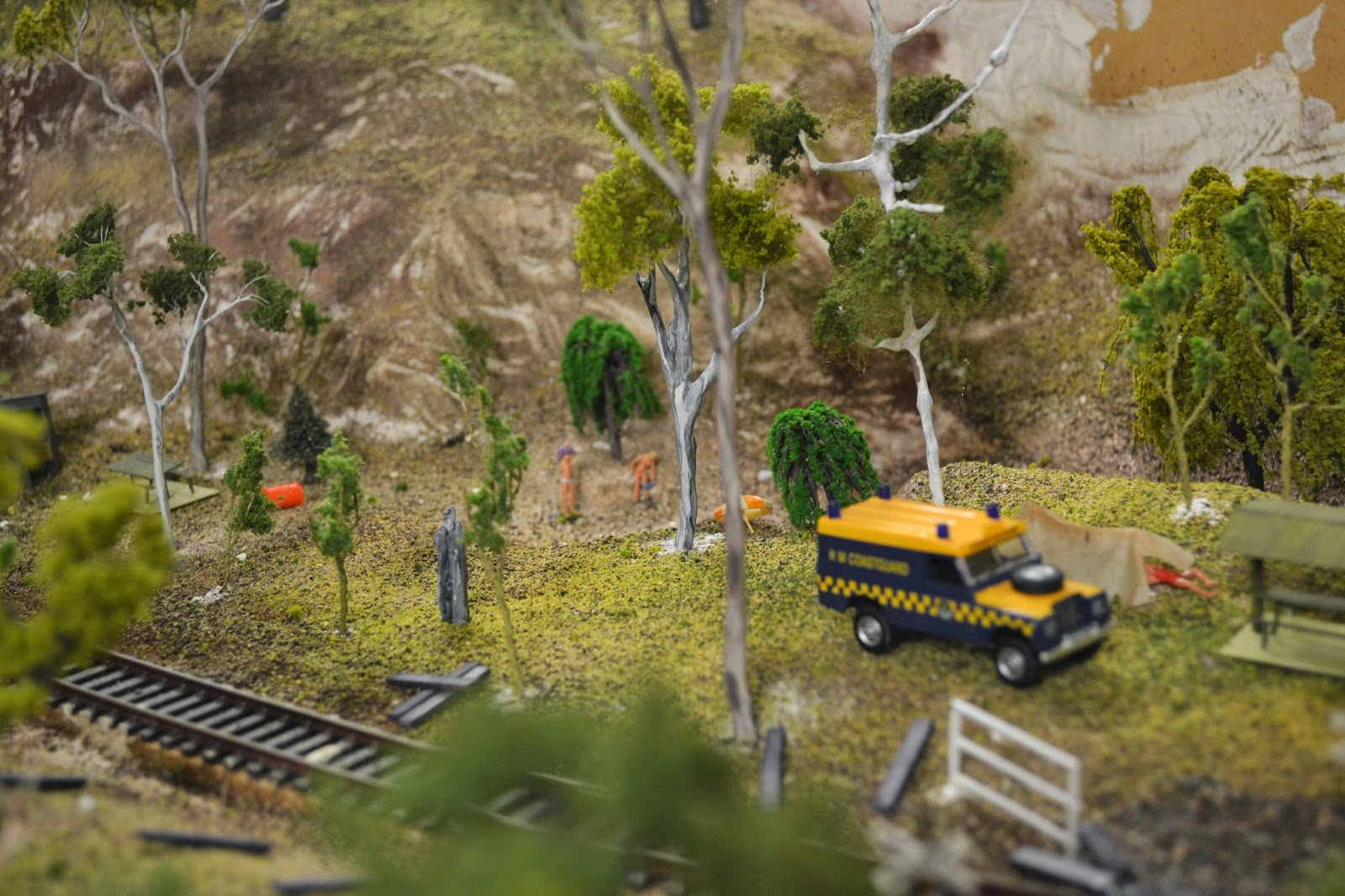 I think we can see the locals having some fun in this photo.  However there is no water in the creek as yet.
I did eventually get around to staining up the various wooden pieces for my road overbridge for the Murwillumbah branch that I mentioned in last week’s Blog update.  But it was not until late this afternoon that I finally got around to it. So tomorrow I might glue the bridge together and install it onto the layout.
I'm on holidays this week to watch the Commonwealth Games and do a few things around the house.  I might still be able to get down the shed most days and do a bit more work.  I plan to have a running day next Saturday.
Posted by Cassino at 8:05 PM 2 comments:

I spent some time in the shed this afternoon and whilst listening to the football on the radio, I installed a few telegraph poles that I have had lying on the layout for well over a year.  These were located around the Nammoona Ballast Siding Loop and headed towards the Hotham Road level crossing on the northern outskirts of Cassino.  There were also a few more installed around Ron and Marg’s B&B just outside Fairy Hill Loop.  I also fixed up a few detail signs on the layout.
On Tuesday night last week a group of us went to the local – Union Pacific Model Railroad Club (UPMRC) Buy and Sell.  I went halves with Darren in 14 very nice bargain priced trees made by Bob Mawson.  I planted then on Saturday.  Apparently Bob was going to have lots more on Saturday at yesterday’s AMRA club at Zillmere Open Day combined with a Sale event.  Apparently it was quite good.  But given that my son was playing soccer at the other end of the universe – Beaudesert at 10:00am and we stopped off at the Jimboomba markets on the way home and then went looking for my nephew’s new home at Flagstone at the back of beyond west of Jimboomba, there was no way I could get to Zillmere and pick up some of those great trees made by Bob.  However, today I went to the All Gauge Model Railroad Club (AGMRC) Table Sale Buy and Sell at their clubrooms.  Fancy that – three different Clubs having sales within the one week.
I have also been slowly reducing my excess rolling stock collection with one wagon here and one wagon there.  So I guess I have been having my own personal Buy and Sell also.
Yesterday afternoon/evening I spent some time cutting up pieces of scale wood as I was progressing a standard NSW road overbridge for my layout.  I have also cut up enough parts for two more bents for a bridge I will be installing on the HO Club Layout.  I have assembled the two bents for my layout and just need to assemble the bridge frame underneath the road.  I plan on doing that tonight, if I can hold my hand steady enough for the glue to dry given all the coughing I am doing.  The next task will be to stain the bents and the bridge frame.  Then I will cut up some roadway, stain it and when it is dry, I will add it to the road frame.  I have some scribed timber that I will cut up and use for the bridge planks.  It is close enough to the correct thickness - 8" instead of 9" - but who will tell.
Tuesday this week is our next Tuesday Nighters get together, this time at my place.  I have put a few of my scenery items away in the shed to make room for the hungry hoards.  I had this equipment - various coloured scatters, tree making items, ballast and coloured sands/dirts in various places around the shed as that was what I have been doing lately. I will also give the shed a quick vacuum out on Tuesday afternoon just before I get my coffee cups out of storage and give them a wash and get ready for the evening.  This morning before going to the Buy and Sell I also hosed out the pergola and housed down the outdoor furniture, as we will retire to there on Tuesday night for tea/coffee and something to eat following a tour of the layout, as we certainly will not fit in the Shed with the numbers planned for this Tuesday.  I usually get bagged for having no room in the shed a few times during the evening.  I just hope it will not be too cold!
Posted by Cassino at 5:27 PM 1 comment:

On Saturday I went to the local MERG meeting where there was a presentation on “Introduction to Electronics”.  This was followed by a soldering session where we could put together a kit.  I purchased a LED dimmer kit to work on.  The day was attended by two fellow club members and about a half a dozen other interested people.  It was very informative and I guess the soldering session was where I gained some confidence in soldering on a small piece of strip board.  During the soldering session, I could not differentiate between two ceramic capacitors so I could not complete the kit.  I had to wait until I got home, and it was not until this afternoon that I put the items under the magnifying glass to read the writing on them to differentiate them.
So this afternoon in the shed, I finished off the soldering of this kit and installed the five jumper wire connections.  I do not have a 12 volt power supply to test the kits, so I might have to make one of those as well.  After completing the LED dimmer kit, I decided to put together a multi purpose flasher kit, which I finished.  I had previously purchase three of these as well as another LED dimmer kit in a bulk order from MERG in the UK with a couple of other club mates.
So not much modelling related activities this week.  I just can’t get motivated to work on the Waiting Shed for Glenapp Loop.
Posted by Cassino at 5:49 PM No comments: