On Tuesday night a few of us got together on my Whereby channel for a chat on modelling.  On Wednesday evening I joined the Qld Railways Modelling chat with the Wuiske’s and a few others.  On Friday afternoon, I went down to the shed and installed all the road markings around my traffic lights located just south of Lismore station.  I also started checking out the overbridge at the end of the Cassino station platform at Simpson Parade.  I was looking at what I needed to do permanently install the roadway and the overhead book office.  It has been sitting there for almost 15 years.

On Saturday morning I made a trip over to Austral Modelcraft to buy some styrene as well as buy some decoders for the Club Shop.

On Saturday afternoon after my son’s soccer game, I installed the check rails in the level crossing on the north side of Cassino at Hotham Street.  I them installed the roadway around the location and stained the road.  This also has been waiting for about 14 years to be installed. 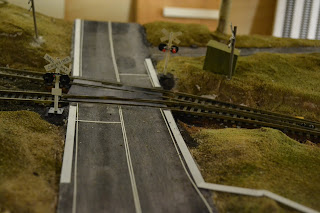 After this, I moved back to Cassino Station and Simpson Parade and continued working.  I build a frame foe the road bridge, painted it and installed the road over the top.  I then build a frame for the overhead station booking office and installed some support posts.  The frame was painted and the overhead booking office was installed onto.  I then painted up a footpath for the bridge and used some 0.060” Angle as a gutter.  Later that night while looking at google maps view, I discovered that there was no footpath on the southern side of the bridge, but I found out that the fence on the bridge was made from round pipe for the rails.  It also has a very rusty wire now.  So I will model this look.

So today I made and installed this fence.  I also added some fencing and road guttering down towards down towards the town side of Cassino.  I also did some work on the front and side fence of one of the houses in Canterbury Street. 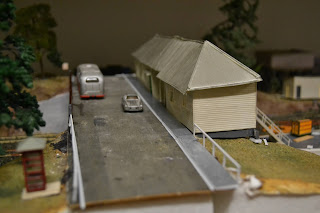 The first view of the road overbridge at Cassino. 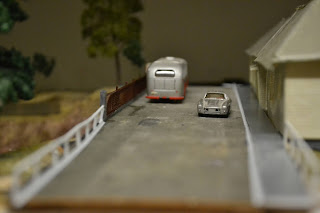 Another view with the wire fence almost in view 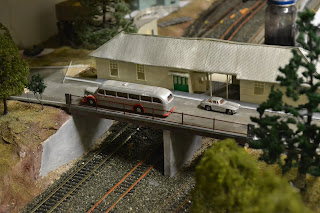 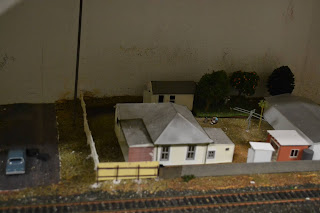 The house on Canterbury Street now has as front fence.  Still more work to do to complete this house. 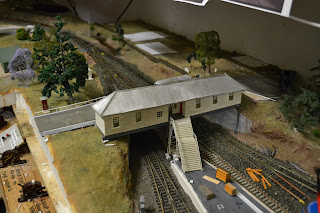 The station from the opposite side of the road.  The platform steps have now been permanently installed.  It has taken maybe 20 years to do this.  The overhead booking office and the platform stairs were from my first version of Cassino that predates the shed.

Today I had a bit of a surprise.  David Lowe came over this morning and presented me with a working Fast Clock device to plug into my NCE Cab Bus.  I was after one of these for the North Coast Controller to use.   This will tell the North Coast Controller what the time is when he is talking to the various locomotive operators and he can look at his timetable graph and tell if the train is on-time, running late or running early.  It helps him to keep the trains in the timetable running more or less as per the timetable graphs. 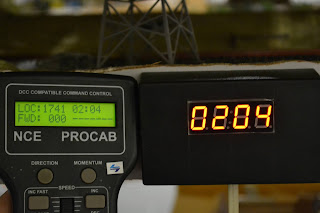 The Fast Clock display matching time with the NCE cab bus as displayed on a Procab-R throttle.

Dave also dropped off three of his little track current sensing devices.  Actually it is very similar to the NCE BD20.  David has made these himself and they can be used in various circuits.

I have some of the Tuesday Nighter's coming over on Tuesday.  But to give them a taster, here are my set of traffic lights working.  This was taken pre-installation of the road markings.

Here is an example of my level crossing detector working.  But I had an extension lead across the track just past the crossing.  This shows the ability to lock out the activation of the crossing when shunting the Meatworks Siding.  This was taken pre-installation of the check rails and balsa roadway through the crossing.