Travelled Some Miles This Weekend

I had Friday off and was checking my email and facebook feeds early in the morning when I discovered that Aurora Trains has received another shipment of Auscision according to his facebook.  I could see that my long-awaited Coil Wire carriers had arrived.  So while watching some catchup TV later that morning, after I had already spent an hour on the phone for work, I received a call from George and he advised that my models were in.  I advised I already knew that and so upon finding out that he was in the shop, I dropped everything and went over to pick them up.

Friday night I hit the road to Brendan’s for a BBQ and modelling night.  Darren and Geoff also attended.  We got to see the small amount of progress on Brendan’s new VR layout, had a very nice couple of snags on bread – true model railway food.  I spent the evening cutting up styrene for the upcoming ‘Model Railways For A Day’ Convention in three weeks.

On Saturday quite a few of the Tuesday Nighters group ventured down south to visit Greg.  Shelton cycled to my place and when then we picked up Darren and then went to Greg’s place.  Grover was already there, and we were soon joined by Arthur, Bob and Peter.  I bit later Dr Peter rolled up.  Greg and Kim put on a fantastic BBQ meal with salad etc. and a few drinks  I had a great time looking at Greg’s layout in an airconditioned 20’ x 10’ room.  The sceniced layout consisted of three loops around the room, with various passing loop, shunting areas and a very nice loco shed.  All of this is DC controlled.  No moving into the 21st century for Greg.  If it works and suits his needs why change it.

After everyone left, Shelton and I followed Greg, Grover and Darren to Glenapp Crossing Loop to visit the Glenapp Boys.  Rob and Dennis showed us around the signal cabin and were very friendly.  To our surprise, there happened to be two container flats sitting in the disabled wagon siding with loaded butter boxes on them.  Apparently there was a coupler issue, one wagon was minus its leading coupler.  So I might have taken quite a few photos.  What a great opportunity to get some photos of the Loop and the surrounding area considering that the next area that I will put some more work into is my Glenapp Loop and its back scene.  However, when I reached for my camera, the battery was flat.  So I had to revert to my iPhone to take the photos.  This area around the Loop is immaculately maintained by the Glenapp Boys and it is a credit to them.

So here are a few detail photos around the Loop. 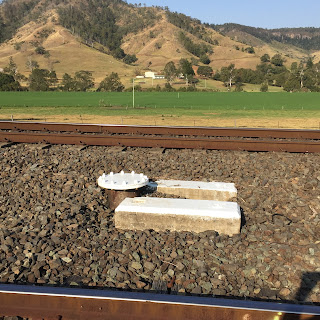 No Doubt this was where one of the water columns was in steam era days. 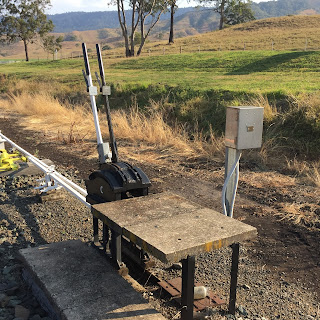 The point levers into the disabled wagon siding 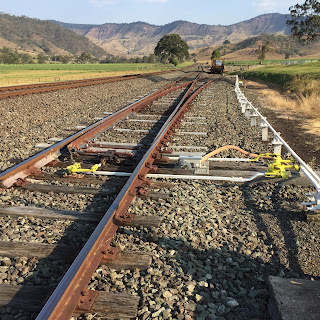 Someone has been very diligent doing the painting in white and yellow. 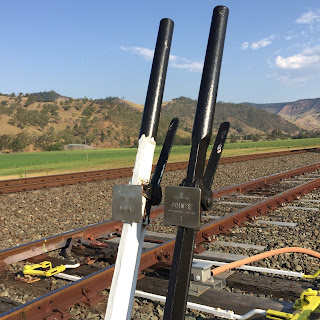 The signal levers up close 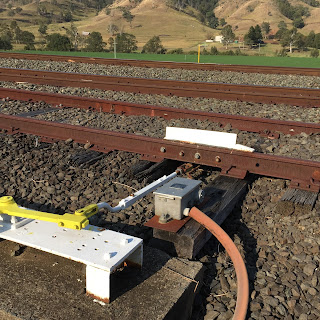 A derail down the siding at the clearance point. 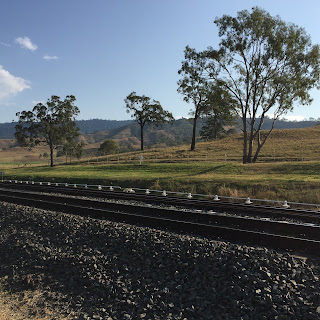 So looking down the loop we see this shot. 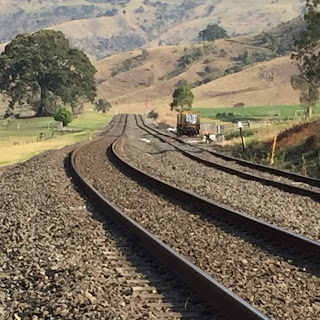 Something in the perway/disabled wagons siding. 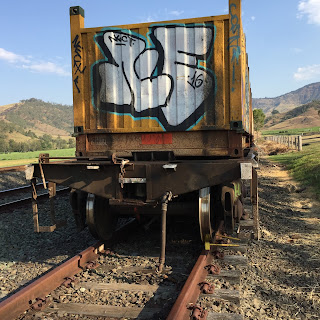 Oh Look.  It can't be towed towards Brisbane. 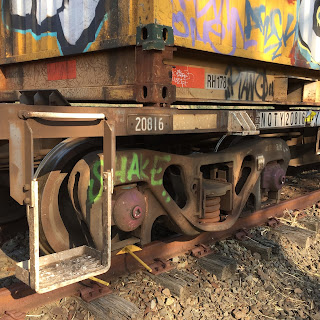 Let's check out the springs.  Looks like it is loaded. 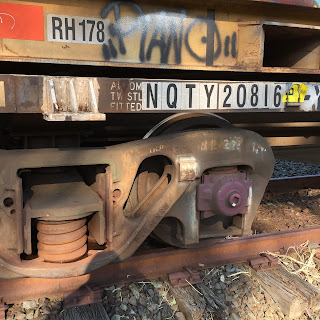 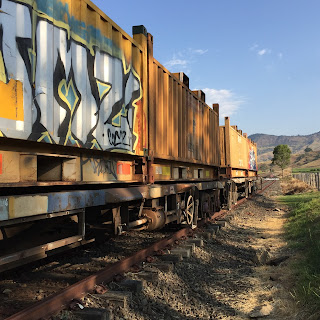 But wait, there is more. 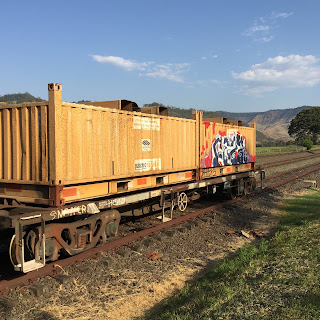 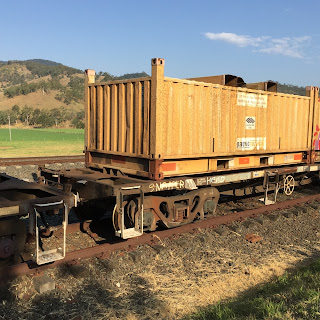 Shot of the butter box container 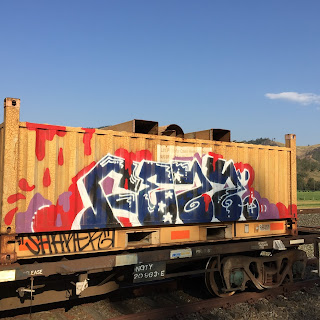 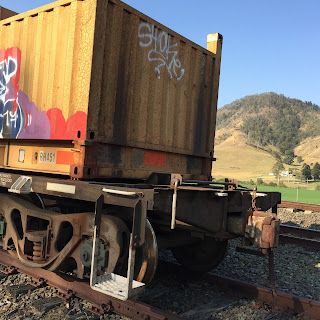 This end has a coupler.

Not wanting to waste the time, I tried to take a few scenic shots and hopefully these can be stiched together for pasting onto wall behind my Glenapp Loop. 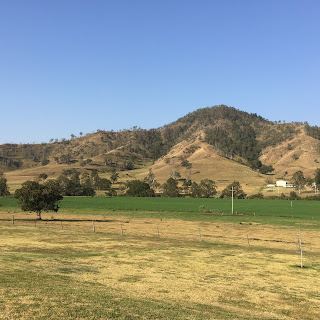 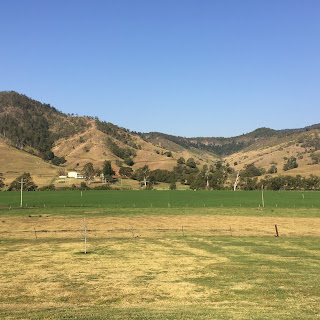 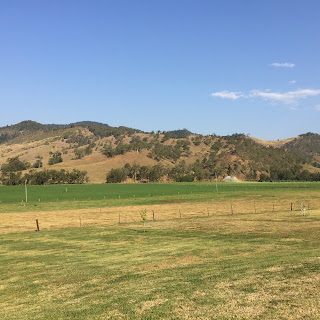 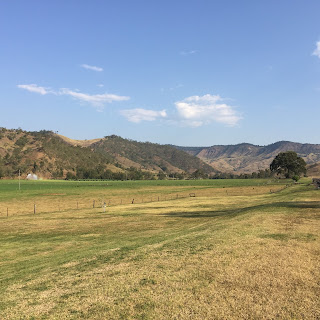 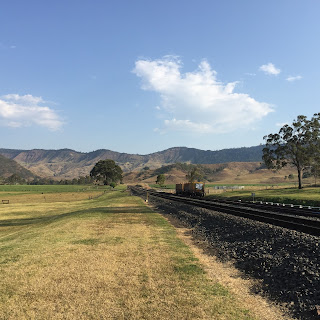 Now I had to also show this photo blown up a bit.  That shed on the side of the hill is a ripper.  I think it might have had an accident.  Who said you can't have one like it on your layout? 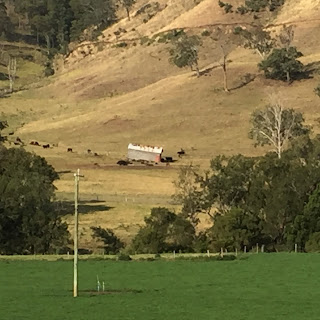 A great view of a shed in the distance behind Glenapp Loop.

On Friday Night Brendan was offering an old BCW that he had started to turn into a very nice scene with doors open for locating on a farm.  I took this great little model with open arms.  I spent some time in the shed today looking at where I couple place it.  I feel there are two possible locations, the first Fairy Hill Farm, with the second being near the Cassino Meatworks siding on the opposite side of the track.  I think Fairy Hill Farm is winning.

While in the shed, I added one Auscision Coil Wire wagon to my steel train which was sitting in Grafton Yard.  This may be problematic, as I now think this is going to make this train over length.  I’m sure North Coast Control will eventually find out when the Operating Session continues sometime in November.  I just hope that it does not cross another over length train at a loop that has a slightly shorter length.  I think this adds to the atmosphere of the session.

I also put together 48 Tichy Tichy 55 US Gallon drums and painted these silver and black.  I also placed these around the layout.  Most went into an open wagon that is currently positioned in the Shell Oil Siding at Old Cassino for case loads of fuel products.  I also cut up some old material and have created a few towels to be placed near various people on the layout swimming.

I also decided to hit about a dozen wagons with some weathering.  I will see how that turn out next weekend and may show some photos then.
Posted by Cassino at 7:51 PM