This week, I have been pottering along continuing to work on my Fetters Shed.  I can advise that all the walls are complete.  The roof structure was built.  The four doors were built and everything was stained with a mixture of ink pad ink and metho.  When the components dried, I glued the four sides together.  Next task was to cut out some corrugated card as individual sheets, and then I painted both sides of these sheets a corrugated iron colour.  Once the sheets dried, I glued them to the fettlers shed.  The sheets were trimmed to size.  The last job was to attached the doors so they all worked - to some extent - yes they can swing open a bit.  I then cut up some styrene strip to create some wood slats for the doors.  A place was found on the diorama and the shed located.  It then had a few weeds placed around it and it was slightly weathered using the Tamiya Accent Colors.

I also added some trees and weeds to other locations on the diorama.  I also made some street signs and installed them on the layout.  The last thing that has been added is a few railway personnel.  There is still some work to do, as I still have two weeks before time runs out. 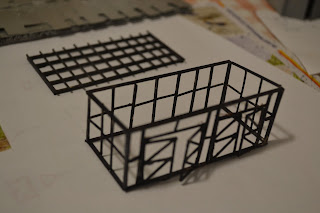 A shot of the shed frame and the roof 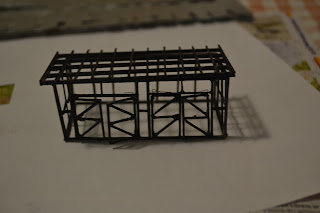 This is a shot of the shed with the roof on top. 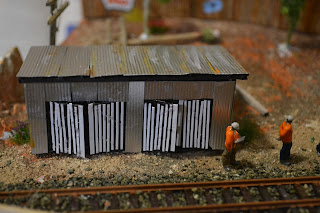 A completed shed, with doors installed 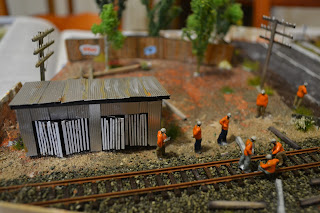 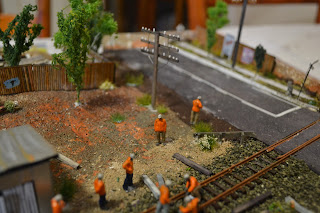 A view of some of the rest of the module.
Posted by Cassino at 5:30 PM