With Monday celebrating Liz’s birthday, I had the day off.  I went down to the shed and started experimenting with the power source for powering the headlights on a car.  I had to have a separate resistor on the source to make it work.  I drilled my hole through the baseboard, a hole through the roadway and poked a hole through the 4 inches of foam.  I fed the wires from the car through the hole and wired them up.  Just like a bought one!  I also painted up some white metal fence posts and also a styrene made farm gate that I had sitting around.  Once dry these items were installed behind The Risk on a little roadway that runs beside the railway line.  The styrene gates was glued to the fence post and now can swing in styrene hinges and can be opened or closed. 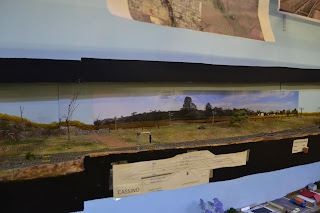 The Risk Crossing Loop with the backscene attached.  The gates has also been attached to the fence post. 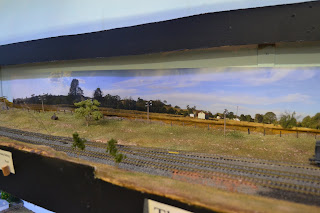 The Risk Crossing Loop looking from the other direction.
Other jobs I completed was adding a small section of wooden fence on the southern side of Railway Parade.  I added corrugated iron fencing to 4 panels of fencing around the water tank opposite the station at Cassino.  I installed the Blue House in its block of land.  I then decided that the house needed a letter box.  So I painted one a matching colour to the house and installed it above the front fence.  The rear of the Blue House looked a bit sparse.  So I added a bit of a paved area out the back and installed a clothesline.  See PK, I can do it in a day –
why can’t you?
On Saturday afternoon I added some people to the backyard tiled area of the Blue House.  I still have a dog house and some kids toys in the form of a Billy Cart and maybe a scooter – don’t say anything PK.  That is next week’s project.  Hopefully completed before the Tuesday Nighter’s come over on Tuesday week. 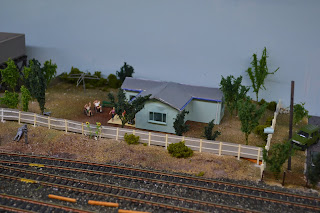 The Blue House with some greenery added.  The family in the backyard having a BBQ. 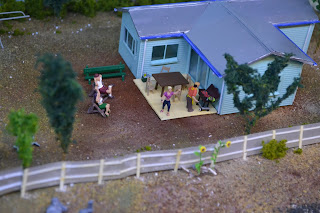 A closeup of the family having a BBQ.  The Table and chairs I mad from styrene.

I started planning for the next house north along Cassino platform side.  So I need to build two structure and a 10’ x 8’ corrugated iron back yard tool shed.

I also decided to try my hand at some backdrop painting – so to speak.  In a couple of locations I have some 1200mm long backdrops, but they sit just proud above of the baseboard.  Thus there is a bit of backboard visible under near the backdrops.  So I thought I would mix and match some paint and add it to the bottom of the backdrops.  Well I’ll be…..!  I did just that and it sort of works quite well.  It looks quite good.  I also used the same technique to apply some paint to the bottom the of the printed backdrop that I took (and PK stitched together) at Glenapp Loop.  It looks even better. 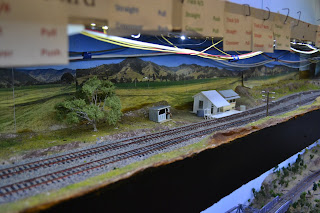 Glenapp Loop with my backdrop in place.  I still need to do some more work fixing the wires up to the baseboard above. 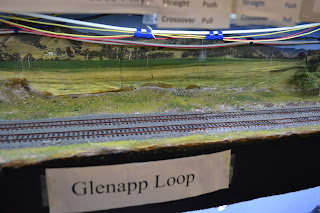 Glenapp Loop, taken from the same position above, but looping straight on instead of down towards the signal box in the middle of the Loop. 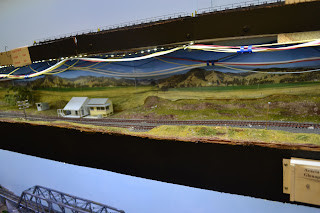 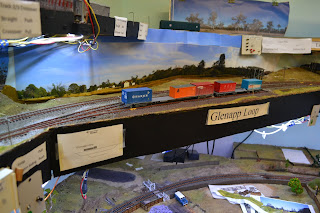 Glenapp looking at the southern end, where the disabled wagon siding remains.  This is a photo backdrop.

I was pottering around at my work bench and got out some old kits for semi-trailers.  I assembled one set of wheels in a plastic kit for a semi-trailer and then assembled a Herpa kit of 8 pairs of truck wheels.  I might have to scratch build a couple of trailers with these items. 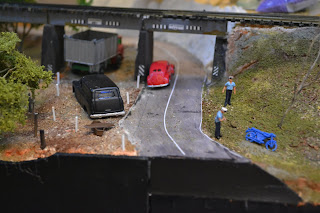 Kyogle - Anzac Drive where an accident has taken place 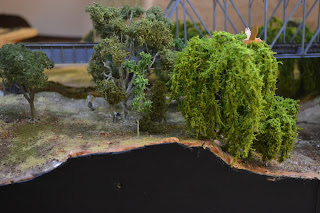 Kyogle, the other side of Fawcett's Creek, with the flying pig and the guy walking his dog and it is using the tree as a convenience. 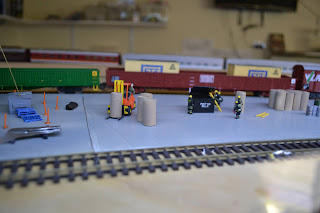 Park Road Siding.  The Fire crew are attending to the industrial bin which is on fire.
Saturday this week involved a trip to the Club for the world’s shortest Club meeting.  But I had a good chat to some of my mates over there.  The trip over involved stopping off at 3 hobby shops.  I may or may not have purchased some items.

Last night I set about building a Walther’s kit.  More info on that as it comes together along with a number of scratch built items to compliment and/or supplement the kit.  I will do some more kit building tonight while the cricket is on TV.

Today I spent about 90 minutes watching an Ops Session on Dave Abeles’ Onondga Cutoff.  Darren and myself sat in a whereby room having a chat, while watching the live stream, before we were joined by Jordan and Andy for the second half of the session.  A great way to spend a Sunday morning.