This week I was out and about on Wednesday, visiting Aurora Train after work and on Thursday I visited Modeller’s Warehouse during my lunch break.  On Friday I signed off early and went down to the shed to undertake a few last minute jobs before the guys visited my place the next day.  Earlier in the day I had received a package of 3 strings of LED lights.  One string was installed above Park Road Siding and it was cut to length with the rest of the string hung above Fairy Hill Loop and joined to the other string electrically.  I also installed quite a few fence posts along the track reserve at Fairy Hill Loop.  I also did a bit of tidying up inside the shed, putting a few storage trays away inside various storage boxes.  The last thing I did before dinner was to install the traffic controller lights for a road over rail bridge where the painters have taken possession to paint the bridge, and one lane has been shut down to allow the painters to work safely on their task.  A bit later in the evening, I realised that I could accomplish another task.  I created some pieces of styrene to secure the base of my gas discharge assembly at Lismore.  This assembly has just sat in the siding behind the Lismore station for a few years.  But I have now just secured the base so that the assembly’s sides are perpendicular instead of being at a skewed wide angle.  I should paint this structure pretty soon I suppose as well.

Saturday dawned and I did a few more things in preparation for that day’s NMRA meeting at my place.  About 25 or so members rocked up, and with my family included, we were under the 30 people limit currently imposed in south east Queensland for a private residence during our current Covid restriction.  I had mates Greg and PK strategically positioned outside the shed and they were ensuring that anyone entering the shed had to carry a golf ball which they took from a bucket.  When there were no more golf balls in the bucket, people could not enter the shed as the shed was then at capacity until someone left the shed and returned a golf ball to the bucket.

At the meeting we had a zoom presentation from the US arranged by Duncan.  The presentation was of an N scale layout.  I was mesmerised, as I would not have known it was N scale unless some told me.  It was very well detailed, and trains ran very well.  Next up we had Arthur Hayes talking about the current NMRA AP certificates with examples on how the points scoring works for categories like Structures.  I have a plan to try and submit 6 qualifying items for assessment as well as providing another 6 example structures for my AP Certificate - Structures.  Who knows, that might even occur before the end of the year.  We had an update on Division business followed by a BYO lunch.  After lunch we had our usual show and tell and then Duncan started by interviewing me about the layout, and then the audience chimed in with a few questions.

I thought we had a very good gathering yesterday, with everyone having a tour or two of the layout.  We even got three new members turn up.

So today I started placing some distance markers on the track at a few key locations and added a few more road signs.  I also touched up a few white pieces of baseboard and scenery areas with some dirt coloured paint.  A couple of the road over rail bridges got their distance markings added and a few other locations like the road crossings and rail bridges are soon to get their distances.  I'm sure very few people will see these additions but I think when they are spotted, it will bring a smile to some modeller's faces. 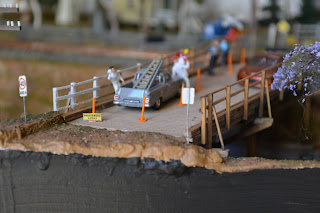 The road overbridge leading to Baker's Farm.  The bridge painters have taken possession of the bridge and started painting the bridge.  Traffic has been reduced to a single lane and there happens to be a few train enthusiasts on the bridge as well waiting for a train to come past. 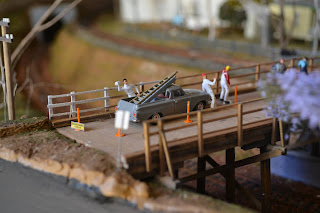 The bridge from another angle.  You can see the painting has started on the bridge.  The rail enthusiasts can be seen top right. 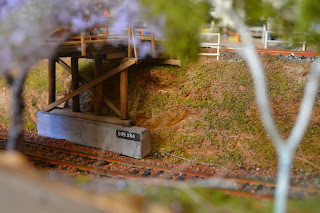 While under the bridge, you can see the kilometres from Sydney that this bridge is located.  A new addition. 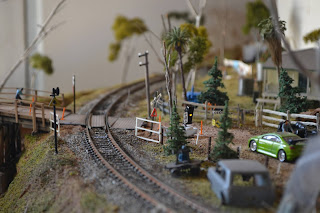 On top of the bridge again and also showing the road crossing.  Also in view in this shot is the traffic control box trailer with a set of traffic lights in it, regulating the traffic over the now one lane bridge as the painters are in possession.
Posted by Cassino at 7:08 PM